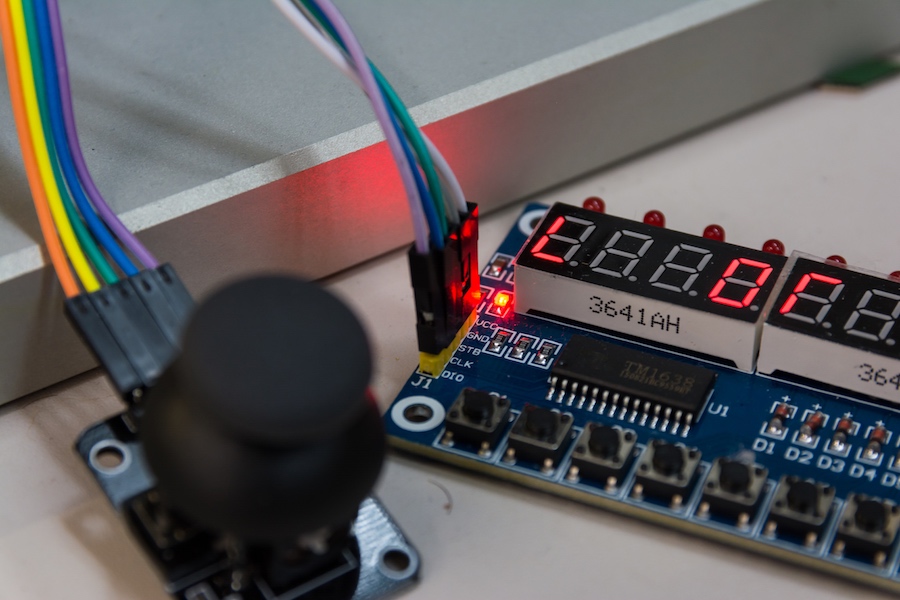 It is pretty common to implement data layers with Rx: just glue some requests together with merge() or concat() and subscribe to the result. It is less common to implement presentation layers (presenters or view models) with Rx. And that is surprising, because a presentation layer is just the type of system Rx is designed for. It is an asynchronous processor — it receives asynchronous signals (user clicks, network responses, or system events), processes them, and emits asynchronous signals back (view updates mostly).

This sounds good in theory, but does it work in real life? The only way to answer that question is to try this approach on a live application with requirements coming from real business needs. I had an opportunity such as this, and this article is about what came out of it.

This approach starts to gain traction slowly; if you have heard the words MVI (Model View Intent) or MVVM with Rx, this approach is the same. But back then these words were not googlable yet, so it was a surprise for me that the thing actually worked. And not just worked, it felt like a long-lost, true way to implement UI. The traditional imperative approach with stateful presenters or view models was starting to feel synthetic and overcomplicated. I had a similar feeling when adopting functional programming after years of Android Java.

Presenter is a function

I start my journey with a good old class Presenter, and I just try to implement its guts with Rx. Eventually, it becomes obvious (and it was quite a surprise) that the class itself is no longer needed. It looks like the presenter is trying to take this form:

An output of this function is an instance of a ViewModel object, which is just a container for a bunch of observables with view states. A view state is some property of a view, like visibility, margin, or button text:

Here are those properties on the screen: 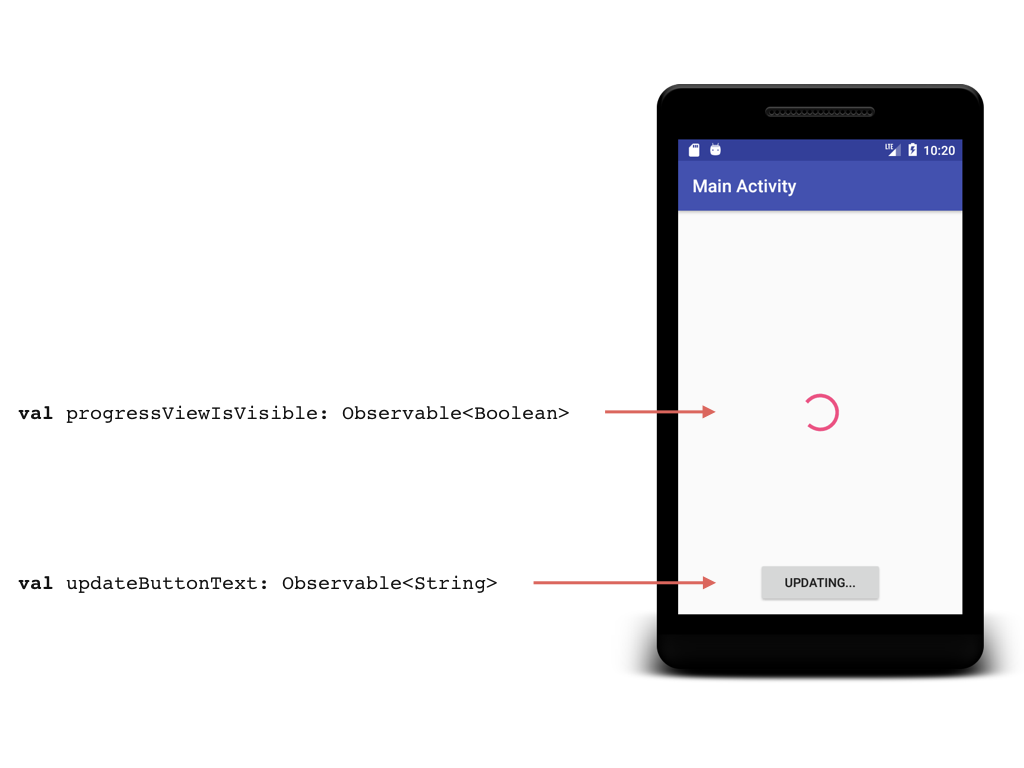 Activity can subscribe to these view states and map their values to corresponding view properties:

So, to sum this up, present() is a function that transforms streams of clicks and other interaction events into streams of view states:

This is what the typical activity looks like with this approach:

Yes, it is that simple. Activity’s role is just to resolve dependencies for the present() function and to provide an entry point to start the whole process.

present() function is the heart of the activity. It owns all the complexity and all nontrivial presentation logic. How is this function implemented? Let’s see that on an example of this activity: 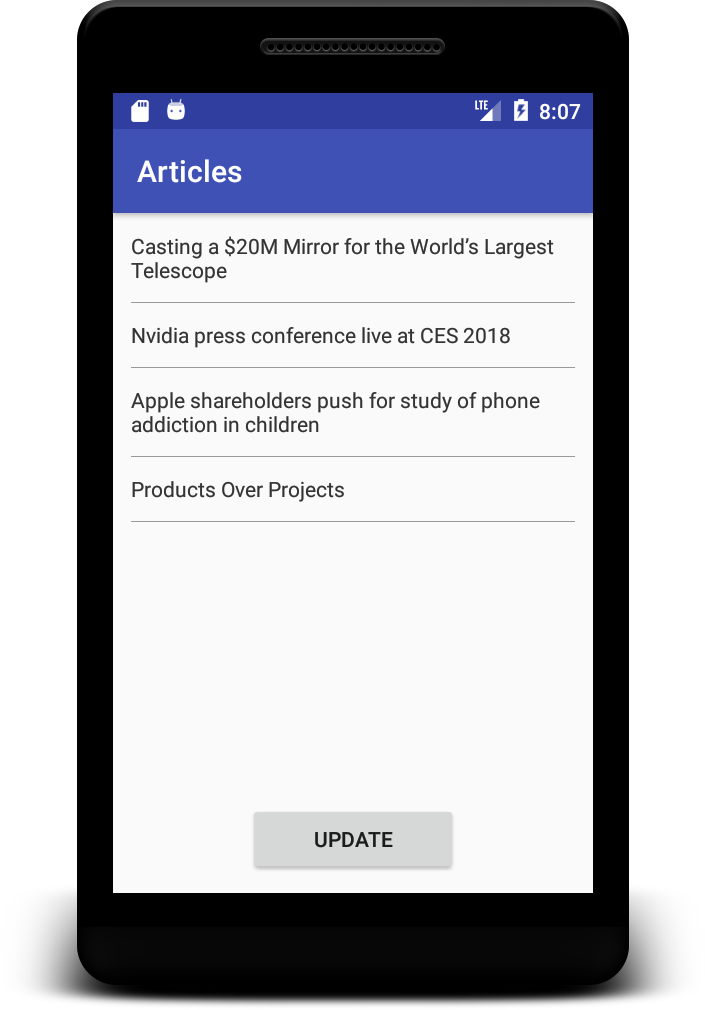 This is a screen with an “Update” button; each time we click it, a new list of articles is downloaded from the server and displayed on the screen.

How do we implement this? As an input, we expect to have a stream of button clicks and something that can download articles for us (call it ArticlesProvider):

We combine these two inputs into an observable that downloads and emits a list of articles every time the update button is clicked:

Suppose activity knows how to “render” these articles (by passing them to a proper RecyclerView adapter, for example). We then consider this observable a view state, and final implementation of a present() function looks like this:

It’s funny how this resembles an ordinary presenter, but look at the articles observable again:

This expression defines a rule for how to compose articles view state. To define another view state, just create a new rule and place it, say, below the previous one:

It’s not hard to illustrate what this decrease in complexity gives a developer. Imagine you revisit your code after a while. Perhaps it’s time to change how one view state works or to fix a bug in one of them. To change something, you need to understand it first. Now, you probably click on a variable or a function responsible for this view state and browse through the entire huge presenter to see where the thing is used and how it mutates. You build a mental model in your head. The problem is that this mental model is pretty unstable. If a colleague comes to your desk and asks something, the model is broken and you have to build it again. With Rx presenter, it’s pretty cheap to rebuild the model. All necessary parts are there in one place: the place where the view model observable is defined.

Now, imagine how much simpler it is to modify this kind of code — you can see immediately what your changes will affect and what they will not. You can be sure that you are not introducing a weird bug by manipulating some shared state in an unexpected way, because all state mutations are restricted to a single place, to the place where the corresponding observable is defined. You can grasp everything that happens with a state with a single look.

The true form of a presenter

Now I want to share another exciting thing about this approach. This insight comes from André Staltz’s talks and MVI documentation from the cycle.js site. Look again at our activity:

The onCreate() function serves the role of a main entry point — it’s like a main() but for an activity. With this in mind, we notice that the code above resembles this:

What does this mean? We just took our super complex activity, which consists of a view, presenter, and asynchronous events of all kinds, and turned it into a composition of three functions. Each function has a deadly simple meaning. Our program suddenly becomes so simple and so easy to think about. Maybe this is the natural way UI programming should be done?

And look at the presenter. It was an abomination with a hard-to-grasp role and a potentially incomprehensible knot of states inside. Now it is a transform function that is simple and elegant. It feels like the presenter’s true form; it was hidden all these years in a pile of OOP boilerplate, and Rx with FRP just helped reveal it.

I am pretty convinced now that FRP is the natural way to write UI applications. From what I have seen so far, it is better than the traditional imperative approach in all aspects. It feels like the programming paradigm of the future.

GitHub repository with an example project